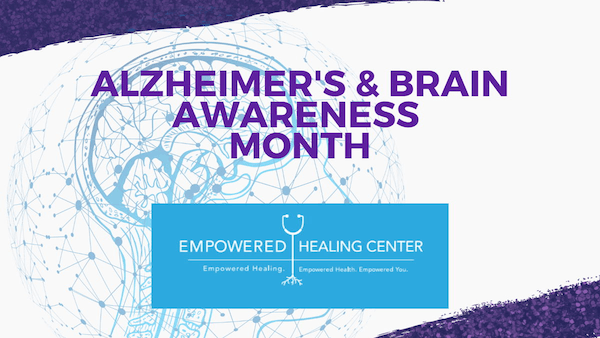 Worldwide, 50 million people are living with Alzheimer’s and other dementias. Every June, the Alzheimer’s Association raises awareness of this neurodegenerative disease during Alzheimer’s &Brain Awareness Month.

Alzheimer’s disease is a type of dementia that causes problems with memory, thinking and behavior. The disease is name after Alois Alzheimer. In 1906, he noticed changes in the brain tissue of a woman who had died of an unusual mental illness. Her symptoms included memory loss, language problems and unpredictable behavior. After she died, he examined her brain and found many abnormal clumps (now called amyloid plaques) and tangled bundles of fibers (now called neurofibrillary, or tau, tangles).

According to the Alzheimer’s association, Alzheimer’s disease accounts for 60% to 80% of dementia cases. Symptoms usually develop slowly and get worse over time, becoming severe enough to interfere with daily tasks.

There is no cure yet for Alzheimer’s, but treatments can temporarily slow the worsening of symptoms and improve quality of life for patients and their caregivers. Treatment addresses several areas: maintaining mental function, managing behavioral symptoms, and slowing or delaying symptoms.

How is it diagnosed?

Alzheimer’s disease is not a normal part of aging. The most common early symptom is difficulty remembering newly learned information. Changes typically begin in the part of the brain that affects learning. According to the National Institute of Aging, people with Alzheimer’s have trouble doing everyday things, such as driving a car, cooking a meal or paying bills. They may ask the same questions over and over, get lost easily, lose things or put them in odd places, and find even simple things confusing. As the disease progresses, some people become worried, angry or violent.

As Alzheimer’s advances through the brain, it leads to increasingly severe symptoms, including disorientation; mood and behavior changes; deepening confusion about events, time and place; unfounded suspicions about family, friends and professional caregivers; more serious memory loss and behavior changes; and difficulty speaking, swallowing and walking.

What are risk factors and common causes?

The disease likely develops from multiple factors, such as genetics, lifestyle and environment.

The greatest known risk factor is increasing age. The majority of people with Alzheimer’s are 65 and older. About 200,000 Americans under the age of 65 have early-onset Alzheimer’s disease.

Another strong risk factor is family history, according to the Centers for Disease Control and Prevention.

Smoothies are a great, simple way to sneak in extra fruits and veggies.

Blueberries are an antioxidant powerhouse and have actually been shown to improve cognitive function (source) (hence, this smoothie’s brain-boosting powers!). Kale is a powerful detoxifier that also contains anti-inflammatory compounds, and bananas are loaded with potassium, fiber, and many other vital micronutrients. Drink your way to health this morning with this simple, flavorful smoothie.

Combine all ingredients in blender and blend until smooth.