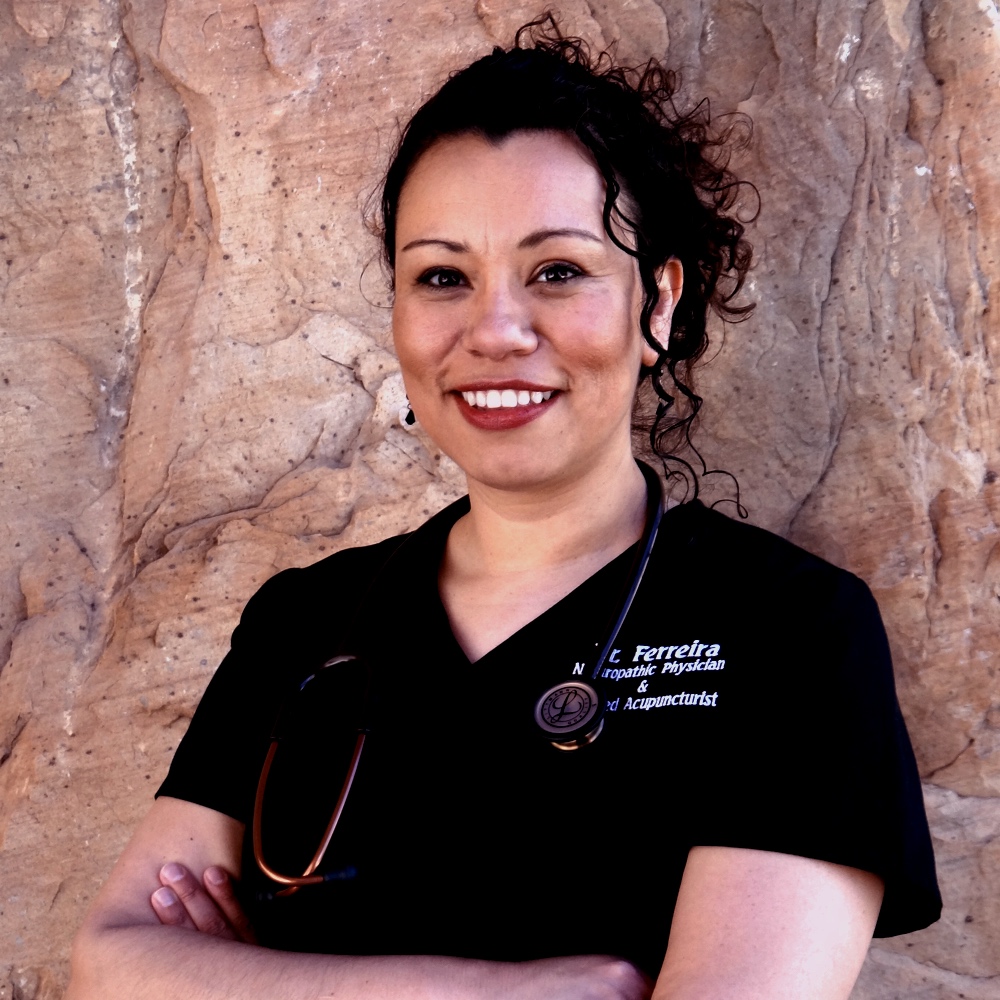 Dr. Ferreira received her Bachelor’s of Science in Molecular, Cellular and Developmental Biology from the University of California, Santa Cruz in her home state.

She worked as a Research Associate in Cardiology and Hematology Medical Research at various reputable institutions while preparing herself for medical school.

Her desire to practice Complementary and Alternative Medicine (CAM) never ceased to grow throughout this time. After searching for a medical school that would allow her to follow her passion she then found the specialty of naturopathic medicine and left her career in medical research after enrolling.

In order to compliment her studies in conventional medicine and CAM she then sought to acquire a strong foundation in eastern medicine, leading her to also pursue an education in Traditional Chinese Medicine (TCM). Her search to become a holistic practitioner lead her to simultaneously attend naturopathic medical school at Southwest College of Naturopathic Medicine (SCNM) and her Masters at the Phoenix Institute of Herbal Medicine and Acupuncture (PIHMA) in Arizona.

With much dedication in attending two professional programs simultaneously, Dr. Ferreira was able to obtain her professional Doctorate in Naturopathic Medicine at SCNM and her Masters of Science in Acupuncture at PIHMA. Upon completion of her medical boards she then completed the STAIR Integrative Residency through Bastyr University, which was sponsored by Integrative Therapeutics.

Dr. Ferreira has always felt the need to be involved with her community and for this reason has volunteered at various clinics and hospitals in California, Arizona and Utah since 1996. Upon moving to Utah she felt impressed to find an organization that she can volunteer her professional skills, that would allow her to serve a population that had a great need. She was able to learn more about the Cancer Wellness House in Salt Lake City and has been volunteering since.

Dr. Ferreira assists cancer patients by providing acupuncture in addition to counseling of Complementary and Alternative Medicine (CAM). Her life long passion and dedication to the health care field has continued to drive her to work in the public’s eye as to inform of resources available as to empower individuals of their own health.

During her down time Dr. Ferreira enjoys being outdoors by participating in hiking, trail running, snowboarding and practicing the art of fire poi. These are only few of the activities she loves. Her greatest passion has been in the kitchen, creating nutritious dense foods that are packed with flavor. She is also enjoys practicing spiritual meditation and is an active member in her church and congregation where she also volunteers in various affiliated activities.

Initially I did not want to be a doctor as a child, I wanted to be a Veterinarian instead because I liked the idea of practicing medicine but did not want to be like the many doctors my family often encountered. It was with time that my perspective changed after finding the inspiration to become a physician.

I was born and raised in Bakersfiled, California to immigrant parents from Michoacan, Mexico. My late father decided that he and my mother should migrate to Bakersfield because it is were a large part of agriculture occurs in California. With only a kindergarden education, but great skill in the agricultural field, he knew that there would be sufficient work available for them. Like most immigrants, my parents brought their culture with them, which included multiple natural ways of healing when ill. Although my father worked long days as a field worker, picking various crops, he came home at the end of the day to work on the home garden he planted to help sustain my family. This garden not only consisted of various vegetables and fruits but also medicinal plants too. Spending much time with my father in the garden, he began to teach me of what each plant did and began to see their value in our lives. I knew that these plants were important enough to continue to keep learning about them. My favorite herb became Yerba buena, mint, because I often needed it as a child. In hind sight I can now see early signs of my diagnosis that I received while in medical school.

My parents did take clases to learn English but communicating with it still proved to be difficult for them despite their constant dedication to studynig it. For this reason my siblings and I found ourselves translating for them at doctors’ appointments. Since work conditions for field workers is not ideal, being exposed to toxic amounts of pesticides and long labor intensive hours, my father got hurt on the job multiple times. He found himself seeking out medical care often despite doing all the home care he knew he could do to help him palliate his symptoms. It was at this point, I began to see the disconnect with the doctors that treated us. The language barrier caused most of these doctors to feel frustrated, which would result in inferior treatment to my parents. For this reason I did not desire to be a physician, as I did not want to belittle patients like my parents, as that is the association I began to make with physicians. It was not until junior high when the principal of my school, who was also my parents evening English teacher at the local adult school, had me rethink the medical profession. I had told him my disinterest in becoming a physician and why. He then asked me why I could not be the type of doctor that I wished my parents would be treated by, someone who understood the culture and the language with true compasion. It was this question that began my burnig desire to be the doctor that my parents and others who spoke Spanish deserved. Optimal primary care does not have to be lost in translation.

As I saw my father’s health slowly deteriate with the multiple pharmaceuticals he was given to treat the symptoms and direct-effects of his prescriptions, I knew I needed to do more for him. His health, and later my health, have been the inspiration to practice naturopathic medicine. I did not know this branch of medicine existed, until I was in the process of applying to medical school. Early on I knew I wanted to combine the knowledge of conventional medicine and incorporate the knowledge of natural therapies, similar to that which my parents brought with them from Mexico. While voluntering at the local Emergency Department as a Spanish translater during high school, I came across a Doctor of Osteopathic medicine (DO). I asked that doctor what that branch of medicine was and he informed me that their philosophy was a holistic approach, similar to the type of medicine I was desiring to practice one day. During my process of applying to Osteopathic Medical school I stumbeld across Naturopathic Medicine. Although osteopathic medicine would offer me a philosophy different from the conventional physician, it still was not complete with the curriculum of natural therapies (botanicals, nutrition, homeopathy, etc.). After looking further into naturopathic medicine I knew that I had to bring my application process to osteopathic medical schools to a hault and begin my application process in naturopathic medical school instead. I decided to also apply to acupuncture school to complement my naturopathic medical degree.

After commencing my studies simultaneously at naturopathic medical school and acupuncture school, my stress and anxiety levels began to increase significantly. With each quarter and semester that passed by, the anxiety began to grow to the point of debilitation; I knew that something needed to be done before my studies were severely hindered. I did everything I knew possible to help manage the stress and palliate the symptoms while I looked for the true cause. It was with further investigation that made me re-visit my gut health, despite being already on a healthy diet. After discovering food allergies and intolerances, I eliminated them from my diet. I found that my debilitating anxiety, which would cause panic attacks, was drastically reduced. I began to feel like myself again! As I worked with my physician and related my discoveries, we were able to look further into my case and come to the diagnosis of Crohn’s after appropriate labs and images were taken. Receiving this diagnosis finally brought all the pieces of the puzzle together with my current health and early signs of the disease that I had experienced throughout my life. Instead of being upset of the diagnosis I felt empowered to be my very first patient while in my second year of medical school. Naturopathic medicine and Traditional Chinese Medicine (TCM) were able to help me manage my Crohn’s and bring it into remission. For this reason, I know from personal experience the connection that the gut and brain have. I understand what it means to have severe anxiety that hinders your every day life and to also have an unhealthy gut, despite eating a healthy diet. I can empathize with patients who suffer from similar conditions and also understand what it takes to get into remission. Staying in remission is a process that requires a lifestyle that may be different from the social norm but it is getting to the cause instead of treating the symptoms. I wish all my patients to find the path to help them get on their healing journey as they too deserve a life where they can feel like themselves once again. Naturopathic medicine and TCM are what make up my profession and my passion in life.